Down with the mob! We love you, Woody

Down with the mob! We love you, Woody, by Antonia Tejeda Barros 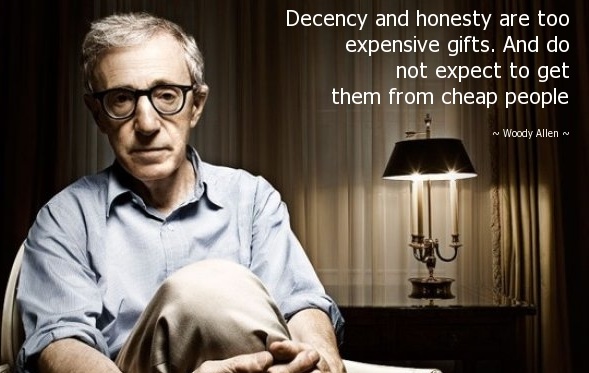 I always thought that the herd was not very bright, but I never imagined that it could arrive to this degree of stupidity. I’m talking, of course, about the internet lynch mob and the witch hunt against Woody Allen.

Who are these pathetic bunch of losers who, in stead of creating, started making a career in tweeting, condemning and hating? Well, we have quite a few. To name some (starting with the most annoying): Sorvino, Gerwig, Chalamet, Page, Hall, Caine (that was really disappointing), Daniels… I am sure I forgot some, since all of them are really forgettable. Most of them will only be remembered by their treason, ungratefulness, hypocrisy and opportunism.

Some people create. Others just trash. In general, the mediocre enjoys trashing the genius.

There are also a bunch of pseudo-journalists and gossip-garbage-magazines and newspapers that have made quite a few bucks denigrating Woody and fabricating news that are completely fake. The winners are: Vanity Fair, The New York Post (Page Six -oh boy, the last article is really pathetic), the Guardian, The Washington Post, and the New York Times. Other magazines just repeat the fake news and add the obscure “sources” of these lies. I have news for all of you: Woody will continue making movies when all of you losers lose your jobs.

In 1992, right after the false accusations, Woody was investigated by both the Child Sexual Abuse Clinic of the Yale-New Haven Hospital and New York State Child Welfare. He even took a polygraph. The result: he was cleared from all the accusations.

Woody wrote a statement on his Official Facebook page on January 18, 2018. It read:

“When this claim was first made more than 25 years ago, it was thoroughly investigated by both the Child Sexual Abuse Clinic of the Yale-New Haven Hospital and New York State Child Welfare. They both did so for many months and independently concluded that no molestation had ever taken place. Instead, they found it likely a vulnerable child had been coached to tell the story by her angry mother during a contentious breakup.

Dylan’s old brother Moses has said that he witnessed their mother doing exactly that –relentlessly coaching Dylan, trying to drum into her that her father was a dangerous sexual predator. It seems to have worked –and, sadly, I’m sure Dylan truly believes what she says.

But even though the Farrow family is cynically using the opportunity afforded by the Time’s Up movement to repeat this discredited allegation, that doesn’t make it any more today than it was in the past. I never molested my daughter –as all investigations concluded a quarter of a century ago”, WOODY ALLEN

So, Woody was investigated and found innocent more than 25 years ago. Everything was part of a lousy revenge scheme, good only for a mediocre movie. In a normal world that should be the end of the story. But we live in a crazy and ugly world. And the mob does not think. The mob wants blood. And many earn fame sucking blood. The herd needs to crucify somebody. And the crocodile tears of Dylan Farrow (a woman who majored in Twitter with Cum Laude, how pathetic) and the dictatorship of the Me too movement (or shall I say: Mob too movement?) really worked. The mob roared and many mediocre opportunistic rats condemned Woody without doubt.

Some month later, when everything became clear (after Moses Farrow wrote his courageous post about his abusive adoptive mother) it was too late to apologise to Woody. So, many are now carrying on with the lie. Well, we don’t buy the lie, dear lynch mob!

Moses starts with the words: “I’m a very private person and not at all interested in public attention. But, given the incredibly inaccurate and misleading attacks on my father, Woody Allen, I feel that I can no longer stay silent as he continues to be condemned for a crime he did not commit”.

Today stupid people become famous and geniuses are unjustly condemned by the mob. This is really hilarious. I wish Woody would make a film about it.

Woody has been always my idol and he will always be. He’s the greatest artist, the coolest musician, the wisest philosopher, the most amazing writer and the most wonderful film maker who proves with his gems that cinema is not dead yet, that cinema can still be an art.

Woody’s movies make life much better. Woody makes us laugh, cry, think and enjoy. So, let’s throw the mob where it belongs: to the garbage.

Now if you’ll excuse me, I’ll go and watch some Woody Allen gem. I’ve seen each of his films 100 times, and I always enjoy them. They are all masterpieces. Thank you, Woody, for your art.

PS: Any attack on Woody Allen or stupid comment denigrating Woody will be immediately thrown where it belongs: to the garbage. Greetings from Spain. 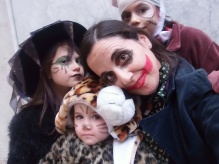 6 Responses to Down with the mob! We love you, Woody